We took a short pre-Christmas break to Devon and Cornwall this week, staying at a lovely country hotel in the village of  Lifton, arriving in weak winter sunshine. We had booked the dogs in too, a dog-friendly fishing hotel although, at this time of year, I wouldn’t be doing any of that. Log fires, good cooking, a warm, comfortable

room, nice local real ales and a good selection of wines, no crowds of other tourists and no need for an Uber to get home were good-enough reasons to visit at this time of year. With no fishing to be had we also wanted to use the hotel as a winter base to explore the area. The ‘boys’ never mind where they’re taken so long as they’re with us and there’s at least one walk a day included, and they have proved over the years to be good travellers and overnight room partners.

Our first morning was wet, very wet, and windy too but it is winter so we loaded up and headed for Tintagel, a pretty Cornish village we had missed out on our visit to the area earlier in the year. English Heritage have recently built a new bridge linking the headland to the island on which is the ruined medieval Tintagel Castle. Previously, a steep cliffside set of steps down almost to sea level, a short wooden bridge over the swirling sea and another steep climb up the other side was the only route to and from the castle. Both castle and new footbridge were understandably closed when we visited but we did walk up to the windswept and rain-lashed new bridge and found it very pleasing. Modern design and paved with vertical pieces of local slate it’s an attractive new access route to the historic site. It’s still a good walk from one of the village car parks to the bridge, including a steep hill down and back (English Heritage also provide a shuttle service when the bridge is open) but it provided us the obligatory blustery walk before rewarding ourselves with a hot drink at one of the few open shops in the village when we returned. 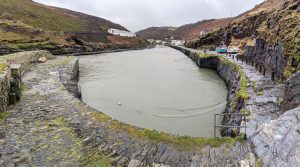 The rain stopped as we drove into Boscastle which gave us another nice little walk opportunity down to the harbour, no other visitors at all, to watch the sea crash over the harbour wall. It was fun, blustery, gathering dusk and very different from our last visit.

On Wednesday we had booked afternoon tea in Looe, another pretty fishing village/town we haven’t visited for years and we also thought we’d call into it’s nearby neighbour, Polperro. The wet weather of the previous day had now turned to blustery gales and heavy rain showers with occasional spots of sunshine and with the light starting to fade by 3pm this was a very different touring experience than visiting in summer. I don’t know whether it was the route we chose or the weather or just that this part of Cornwall is unremarkable but the hours journey was just that, unremarkable. Arriving at Polperro we were directed by large signs to park in what looked like a huge, empty private car park at the top of the village. If it had obviously been a council-run car park I wouldn’t have minded but demanding a significant all-day parking fee when we had no intention of staying longer than it took for a quick look around in the rain and buy a coffee caused us to set the satnav for Looe and move on. Maybe we’ll visit Polperro next time, or maybe not. Maybe we’ll just remember it fondly from when we were younger, when it was a quaint fishing village of tiny cottages around a tiny picturesque harbour containing tiny but colourful fishing boats.

Looe was our next disappointment. Here is a fishing town trying hard to cope with the demands of modern tourism. We parked easily in the quayside car park and walked through the working fishing port. Fishing, particularly on a sea like today’s, is surely one of the hardest and toughest ways to earn a living. Many people are not prepared to pay relatively high prices for a plate of this protein when intensive farming produces much cheaper alternatives for feeding a family. I have the utmost respect for fisher-people but then we do love fish and seafood. The rest of our short walk was uninspiring as the fish market and packing buildings, then the fishing boats tied to their moorings gave way to ugly concrete block sea defences and even uglier black railings bolted atop them. Walking quickly on through the town we found every single business geared for the tourist hordes. Colourful, yes, but so depressing when closed and shut up against the gales and rain and we couldn’t this time even find a cosy warm bakers shop for coffee. But no matter, it’s nearly time for our tea.

The Talland Bay hotel served a very nice afternoon tea in its conservatory. The sun came out which made the pretty location even prettier but it was its unusual decorations that made it remarkable. The owners have obviously different and eclectic taste, that’s for sure.

Thursday dawned wet again but not as cold and the forecast was for a fine day. We had lunch booked at Padstow so this time we were headed to the north coast of Cornwall. We’ve visited Padstow many times, a town that celebrity chef Rick Stein put on the map and has greatly added to the local economy. We enjoyed a look around the harbour and its many shops, all again geared for tourists, of course, but here are also some of the most aggressive and assertive seagulls we’ve ever come across (see my ‘Jonathon Livingston Seagull’ blog). Today again was no exception as two workmen, walking along a harbourside path, each with a box of chips, were dive-bombed by seagulls determined to steal a share of their lunch. This caused the two men to duck, close their chip boxes, furtively look over their shoulders for the next attack and scuttle for cover nearby, much to the amusement of a couple of local fishermen watching from their boat.

Our lunch at The Seafood Restaurant was again just perfect. The restaurant has no Michelin accolades but the staff are welcoming, friendly and well-trained, the service is some of the best we receive anywhere and the fish is sea-fresh, nicely cooked and presented. What more could one want from a restaurant? Their wines, often from Australian wineries we’ve visited ourselves, are selected by Rick Stein himself and this makes for part of the romance of visiting his Padstow HQ but more to the point, we always like them too. Over on the other side of the estuary, in Rock, is a Michelin-starred fish restaurant owned by another celebrity chef, Nathan Outlaw, but we’re not such fans.

We left the three star Arundell Arms Hotel a 5* review and, on our way out of the village called in to the nearby Strawberry Fields Farm Shop, probably the nicest farm shop we’ve ever visited and a too-tempting pleasure to look around. Beautiful fresh local produce, home-cooked bread and pies, simply amazing butcher, cheese and deli counters, a separate, comfortable coffee lounge and friendly local staff, the whole shop was a delight. Well worth a visit even if you’re not staying in Lifton.

Another must-stop before we got back on the M5 was Philip Warren butchers in nearby Launceston, a farm and butcher business originally set up in 1880. A beautiful display of different breeds of rib beef behind clear refrigerator glass greets you walking into their very busy shop, this is obvious quality. As well as farming some of the animals themselves, the Warrens work with about a hundred small farmers who farm around Dartmoor and Bodmin Moor and throughout the grasslands of the Tamar Valley in-between, specialising in native breeds including Red Devon’s, South Devons, Galloways from the moors, Dexters, Welsh blacks, true Aberdeen Angus and Red Herefords. We looked in some awe, bought a couple of steaks to take home and determined to look for similar low food miles farm shops near home.

Until I can post my photos to the site here’s a link to a Google photos album: Winter visit to Devon and Cornwall