Travels of an old Gulf desk 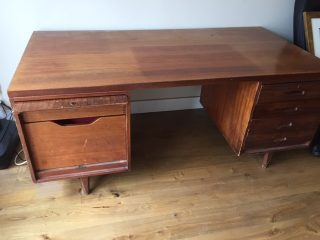 Some of you may remember the office furniture we used in the Portman Street offices, way back when, included a large wooden desk each, with four lockable drawers on the right and a stationary drawer and a large hanging documents drawer on the left. The desk top area was almost dining table sized and it needed to be to accommodate the huge and extraordinarily heavy cathode ray mainframe monitors some of us were starting to use back then when IBM’s “PROFS”, our first proper email system, was being implemented across the company, the boxfuls of green-lined line printer paper, trays of paper-tape reels and the much heavier steel trays of new-fangled punched cards which were the tools of the trade for us programmers. Each desktop also had a large, grey, felt-backed writing ‘mat’ on which we would pencil our code onto our coding sheets, and which, for those of us seated near the Oxford Street windows, caused a dark patch as it protected the polished top from the sun and the new polish which the cleaners used on the remaining visible desktop each night. I remember sitting at my new old desk on my first day and feeling it just felt good, even more so after Sue T***s had kindly gone on a special hunt around Gulf House for a desktop writing mat that wasn’t too dog-eared for me.

I have no idea what adventures the desk could tell of the years before I joined Gulf, if only it could talk, but these were desks of the age of accountants with pens, not a modern IT-enabled global oil company, so it was decided a couple of years later that all these beautiful old desks had had their day and they would be replaced with new, modern, grey, steel, modular workstations, some of which, for goodness sake, were L-shaped to make better use of our open-plan first floor space. So one subsequent Friday we all dutifully emptied our desk contents into crates and over the weekend the deed was done. We arrived on Monday morning to find our new workstations set up in a whole new office layout, my first of very many ‘reorganisations’. None of us liked it very much but, c’est la vie, this was progress. Whatever next, we wondered? Automatic coffee machines to replace our morning and afternoon tea ladies and their trolleys and biscuits? Surely not!

A few of us had become quite attached to our old wooden desks by now. As you know I’m a romantic and when we saw our old desks ignominiously stacked in a corner of the underground garage some of us were moved to do something about it. Don’t Building Services have any feeling, some understanding, of the years of dedicated company service these desks had undertaken, the thousands of hours of work they had enabled, the laughter, the countless night call-outs, the Three Tuns hangovers, the romantic liaisons and other shenanigans played out upon them? There was my desk, for goodness sake, that one, the one with the number ’47’ tippexed on its side! I remember approaching Building Services to enquire what their plans were for the desks and learned they were waiting to be taken away by a ‘dealer’. I can’t remember whether four of us paid the company anything or nothing for each desk but I do remember cancelling my next weekend plans and renting a truck to take one home for each of us before said ‘dealer’ (with ominous overtones of the dark panel truck in “101 Dalmatians”) turned up. I drove our truck all over London that Saturday, with Andy Brown, delivering the four desks to their new homes, including my number 47 to my first floor flat in Walthamstow, “only two flights of stairs, Andy!”. ‘My’ desk really was mine now, and it was home!

Since then (well over 30 years ago) my desk has shared many of our family adventures. It has moved home a remarkable 14 times. It has travelled widely, even coming to Singapore with us where it became the centrepiece of my tropical home office for many years. During this time it memorably supported me during a period when I was home-quarantined after being in China during the early stages of the SARS epidemic and from whose desktop a subsequent contingency plan was developed in case any of the huge Bukom refinery personnel were affected (when the authorities may have demanded the refinery be immediately and catastrophically shut down). Luckily, neither I nor the desk nor any Bukom staff were affected by the virus. It supported us through a new, growing and eventual nest-flight family life, enabled thousands more hours of work-from-home, hobbies and home office phone conferences, without complaint, even when it was stored on its side in a self-store for six months whilst we lived in a mobile home during our self-build in quaintly-named Pratts Bottom.

Recently, many of you also know, I had a lucky escape following a health scare and Paula and I subsequently decided on a major lifestyle change. I retired from the mollusc at the end of last year and now only travel and work for pleasure. We’ve moved back to a flat, this time in Clifton, Bristol, downsizing from our large, self-build family home in Kent, a not insignificant challenge. Inevitably this brought casualties, including my trusty desk, bringing to an end a long and close relationship. Not at all modern, rather too large but still as functional, useful and loved as the day I first sat at it on my first day at work. You’ll perhaps not be surprised to learn that it was a wrench to realise we must finally part. Paula did, unfeelingly I felt, suggest the great council composter in Avonmouth but I couldn’t do that to such a faithful servant, particularly after all these years. So yesterday it went to a new home, hopefully to provide many more years faithful service, for someone who told me that it will be used every day supporting a new business startup, in a lovely village outside the city. I was not able to watch it drive away.