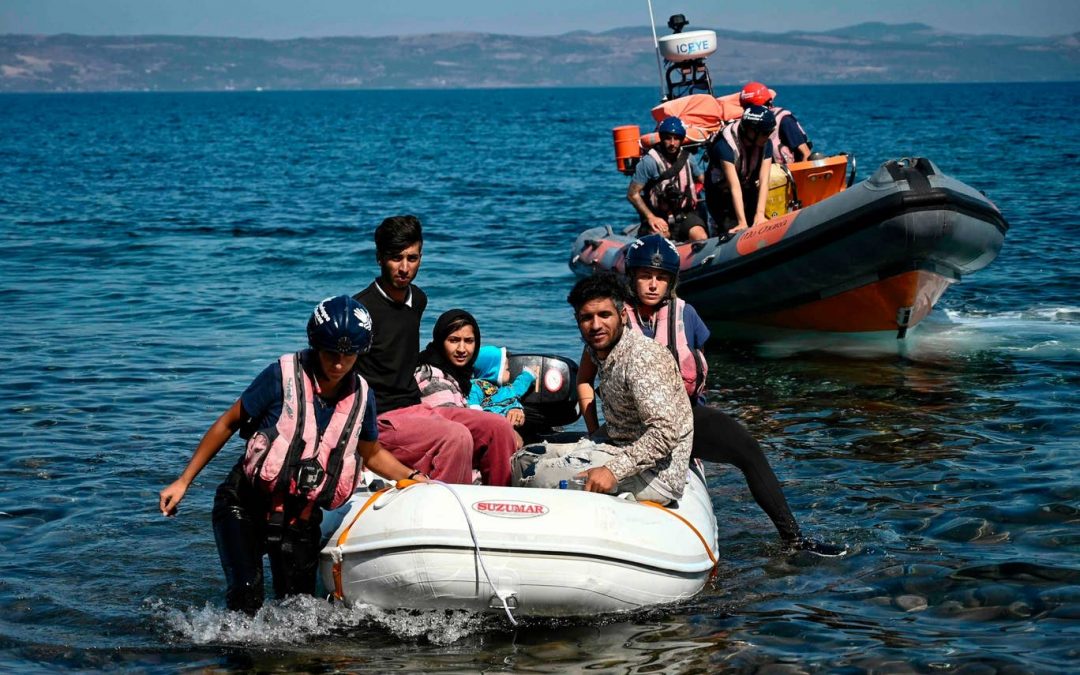 Migrants helped by rescuers arrive on the Greek island of Lesbos after crossing the Aegean Sea from Turkey (AFP/Getty)
Here’s an article from The Independent that caught my eye recently:
Quote:

The European parliament has rejected a plan to step-up search and rescue operations for refugees and migrants in the Mediterranean, thanks to an alliance of far-right and centre-right parties.

The EU’s legislature narrowly defeated the motion by 290 votes against to 288 in favour.

The resolution called on member states to step up efforts to rescue people drowning in the sea, with more than 1,000 lives having already been claimed this year.

EU search and rescue operations have been downgraded and de-funded in recent years as European government policies towards refugees have hardened. Some governments, like Italy’s, have even waged a campaign to try to stop NGOs rescuing drowning migrants with their own resources.

Around 18,000 people have died in the mediterranean since 2014, according to figures released by the UN’s International Organisation for Migration at the start of the month – most of them people trying to make the crossing to Europe.

The bulk of the votes to defeat the motion came from the parliament’s largest political group, the centre-right European People’s Party. The EPP is the home of mainstream pro-EU conservative politicians such as Angela Merkel, Jean-Claude Juncker, and incoming European Commission president Ursula von der Leyen.

MEPs from Leo Varadkar’s Fine Gael party in Ireland also voted against the motion – a move that has prompted a major political storm in Ireland.

The centre-right parties were joined in defeating the motion by far-right and Eurosceptic parties, including the huge delegation from the UK’s own Brexit Party. Across members states, most socialists, liberals, greens and leftists supported the motion, which was put to a vote on Thursday.

“Far too many people are losing their lives in the Mediterranean,” said Juan Fernando López Aguilar, the motion’s rapporteur and a Spanish socialist MEP.

“This is an urgent situation and we have a system that is in urgent need of reform. We are not getting that same sense of urgency from the commission or member states, nor from the centre-right European People’s Party.

The European Parliament in Strasbourg (AFP/Getty)

“Today made it clear that political groups on the right are willing to abandon their legal and moral obligations. They are failing to act responsibly to save lives at sea. Far-right groups often dismiss our approach but it is extremely disappointing that even MEPs on the centre-right do not share any sense of solidarity.”

Among other British parties, the Conservatives’ four MEPs either did not vote or actively abstained on the motion, ensuring that it failed.

All Labour’s 10 MEPs were present and backed the motion, as did Plaid Cymru, the SNP and Sinn Fein.

: Unquote
I normally like The Independent’s reporting but this article took me aback and genuinely surprised me. Yes, it’s sensational but surely EU representatives would not deliberately vote down a plan to improve search and rescue efforts for refugees who are drowning in the Mediterranean? Surely? Well, maybe not. I understand the migrant crisis is pretty bad for Europe’s southern states but still, basic human decency should surely cause members of the EU parliament to support a basic life-saving motion. Wouldn’t it?
I did a little online search and immediately found two articles, one in the Irish Times and another in The Journal, both reporting the same story but this time with reaction from a Fine Gael MEP who helped vote down the motion:
https://www.irishtimes.com/news/world/europe/fine-gael-criticised-for-stance-on-vote-over-mediterranean-rescue-missions-1.4061812
https://www.thejournal.ie/maria-walsh-mep-mediterranean-4866663-Oct2019/

Following the contentious vote Fine Gael MEP Maria Walshsaid: “In the short term, the EU and member states must allocate more resources to search and rescue and increase missions to save more lives. We also need to urgently step up the fight against the organised criminals and human traffickers who profit on the vulnerable.
“The [amended] resolution rejected by the European Parliament today does the opposite by calling for Frontex, the European border and coast guard agency, to share intelligence about its operational activities with every boat in the Mediterranean. That would endanger more lives by facilitating, instead of dismantling, the business models of smugglers and human traffickers. We could not support that.”
…which put an expected and wholly different slant on the The Independent’s original story, of course. Although my suspicions had been proved right I was disappointed the newspaper had published a sensational story that in itself was not incorrect but was only half the story, ‘fake news’, maybe. I decided to write to the editor.
.
“…although [your reporter] Jon Stones’ report was not inaccurate I put it to you that it was incomplete without such a comment from someone like Maria Walsh. I suggest her explanation puts a wholly different slant on the otherwise sensational story you published and is what I am looking for in a properly balanced report. I’m still none the wiser whether the proposal, without this data sharing amendment, is now lost or not and a comment from the original proposal’s sponsors would also be valuable.”
.
I received the following reply:
….which I thought disingenuous and suggested it was highly unlikely my comments would be taken on board let alone result in any admission of inadequate reporting. Clearly such stories are acceptable at The Independent.
A day or two later I received an automated email asking me to ‘rate the support I received’, which I flagged as Unsatisfied with the following comment:
“The story I commented on was sensational as reported but wholly incomplete. Half a story, whilst correct in itself, is unworthy of a quality, apparently independent, news organisation. There was good reason, it seems, why the European Parliament voted as it did but your story didn’t report this, clearly intending to leave your readers outraged, partially factually correctly informed but nevertheless misinformed. Claiming The Independent is a campaigning paper and that what you published was accurate is unsatisfactory and, to an extent, a betrayal of proper reporting principles. This is not what I’m expecting of The Independent. You were caught reporting half the truth and instead of accepting fair criticism you attempted to further mislead by providing a trite ‘politically correct’ response. It’s about honesty, it’s about trust, particularly in the current climate.”
I have to say, if I can’t trust a newspaper like The Independent to tell me which way is up nowadays, what chance for the rest of our largely partisan media? Must I be cynical about everything I read? At least, I suppose, we can still rely on our BBC which seems to me to try hard to be fair. For now.
Or am I just becoming a grumpy old git?  😂