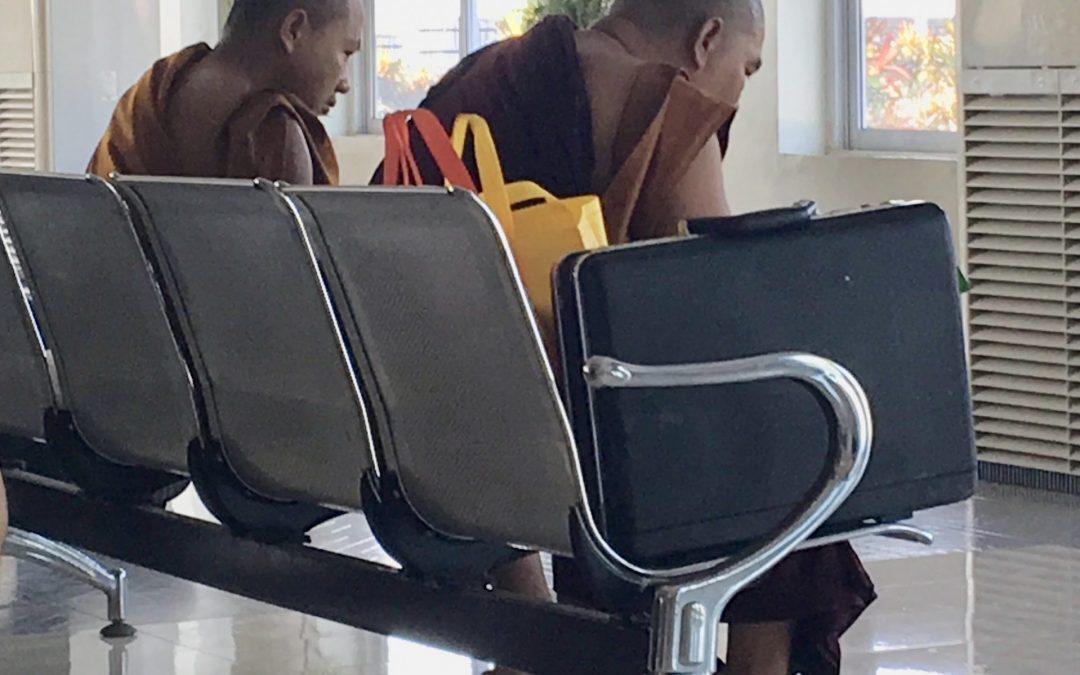 A thousand years in 10 days

Over the last couple of days our very lovely Ngapali resort has been filling up with New Year guests, mainly, it seems, little round Koreans. No, not that little round Korean…wait, one of them is wearing funny round sunglasses….no, it’s ok, I just popped outside and there’s no ICBM in the car park. Whew! Anyhow, it’s been mildly amusing watching their antics in the surf from our loungers. None of them can swim, it seems, and the ladies, wives, girlfriends, whatever don’t seem to have been in the sea or surf before. Fully dressed, whooping and screaming, a number of them are taking endless, and I mean endless, selfies and group photos like this is the greatest fun they’ve ever had (and it may well be) and they’d better record it in hundreds of photos. But someone, in a minute, is going to find the sea demands respect. The surf is quite powerful today and I wouldn’t stand under one of those 5ft breaking waves like a few of the little round men are naively trying, but they’ll learn quickly enough, I reckon, if indeed they all come up again. I can tell I’m pretty chilled-out now if I’m reduced to watching the antics of Little Rocket Man and his buddies.
I’ve spent a long time painstakingly uploading a few photo albums to Google over the past few days and nights as the bandwidth at the resort is minimal at the best of times. Still, in a country where the very basic infrastructure is lacking I’m impressed we’ve got internet access at all. Anyhow, with considerable patience I’ve finally been successful and I’m able to attach the first links to a few early albums to this mail. You’re missing the numerous stories our guides have told us to go along with the photos but I think they at least provide a flavour of this astonishingly beautiful country and its people.
One of the many striking things about Myanmar is how colourful everything is. The sun helps, of course, and the markets are naturally a blaze of colour, of course, but the very colourful and smart ‘longhi’, worn by all Burmese, men and women, adds further personality. Wherever there’s an opportunity to add a little extra colour and prettiness, particularly in the hotels we’ve stayed, they’ll decorate a space with flowers, lights, beautifully-painted paper umbrellas or even a leaf design in a potful of water with bougainvillea and flower heads from the garden. As I’ve noted before, it’s hard not to take photos here and whilst I’ve tried to temper my enthusiasm I’m not apologising if you still find too many market photos or you quickly become ‘templed out’!
Seems we’ve got a couple of monks travelling with us on our flight. Both are intently studying their smartphones and it looks from where we’re sitting like they are using a Sainsbury’s bag for their carry-on. The monks will be called to board first and as it’s free seating on these internal flights they’ll choose where they want to sit first. Presumably this is a senior monk and a bag-carrying flunky monk (!) because your average monk wouldn’t normally go flying around the country, of course. Security at this airport is peremptory at best but we’re on a short internal flight which is half an hour late so far, for some reason that no-one has yet explained. Oddly, a lot of passport note-taking is undertaken at ‘immigration’ whenever we land and take off on these internal flights but we’re guessing they’re just tracking where their tourists go. Never forget we’re not even in a police state but an army state so we’re being ever so polite, smiling a lot and being careful to do as we’re told. No change there, then.
So, on to Yangon, if our ‘plane ever arrives, and the final leg of our tour of Myanmar….
Happy New Year!  🙋🏻‍♂️🙋😎
I’ve been using the movie facility of my camera a little more often than before as there’s just so much going on so do press the little ‘play’ button where you see it.
Mandalay U Bein bridge & night market: https://photos.app.goo.gl/m2ThR6IH4jhQtZmJ3
Chauk market near Mandalay: https://photos.app.goo.gl/NUPvTZaVFTXMlIvP2
Mandalay Buddha workshop, et al: https://photos.app.goo.gl/EaqCIWgrHlovShOp1