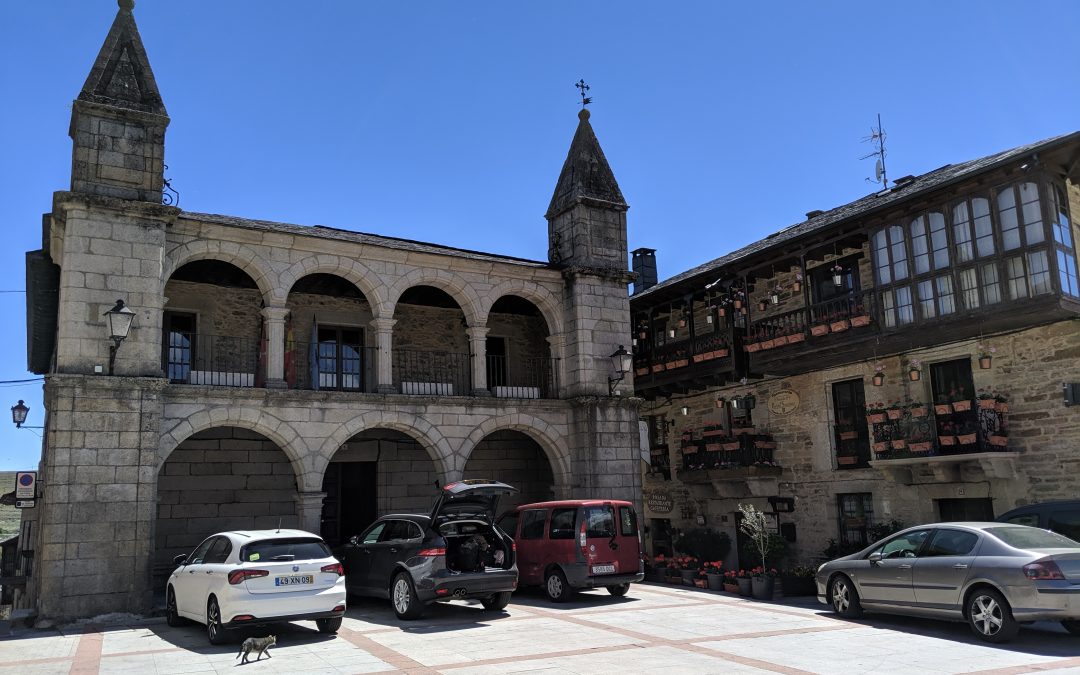 Three days before our 24-hour ferry journey to Santander Brittany Ferries wrote to advise us that, due to rudder problems requiring our ship to go into dry dock for repair, our booking was cancelled, sorry and all that. Luckily, Paula managed to book the last cabin on their 12-hour overnight ferry to St Malo the day before we were originally due to travel. This new plan meant we faced an additional 1000km drive, through France and northern Spain, passing by Santander, to Portugal. We decided to make the best of it, an additional mini-adventure, the new journey part of our holiday. We started well with a nice dinner in the ship’s restaurant as we cast off at exactly 8pm then had a surprisingly good night’s sleep. 😴  Despite earlier misgivings our en-suite cabin was well ventilated and warm, the beds were comfortable and most importantly, the sea was dead calm. There was even a kettle provided and early-morning tea. We arrived at 8:15am, quickly disembarked onto a fast south-bound road and we were on our way.

The long journey through France was uneventful and uninteresting with flat landscape and fast motorway eating up the kilometers. We drove to the pretty seaside town of Arcachon, near Bordeaux, famous, we learned, for its oysters and pole-grown mussels. We duly tested their specialities in an almost deserted seafront restaurant where the hoards of expected tourists clearly hadn’t yet arrived, no surprise as the weather was unseasonably chilly 🥶 and windy.

Crossing into Spain was as if a light had come on. Almost as we drove over the border the scenery became instantly spectacular, green and beautiful. We were ‘turning right’ to travel across northern Spain and we had briefly entered the Pyrenees national park. We’d never been to this part of Spain before. Like many we had limited our visits to the southern Mediterranean areas and islands but we were very surprised to find how beautiful and hilly this area of Spain was/is. We stayed two nights in the green-coloured area of the Google map of northern Spain, first in a quaintly-named town of Aretxabaleta in the province of Gibuzkoa on the edge of the Aizkorri-Aratz national park. ( 🤪There’ll be a test later.  😉) Our room was in a beautiful chalet-style guest house overlooking a spectacular valley view, pretty-much miles from anywhere.

The next day our new route quickly took us out of this verdant northern countryside and we were back to bowling through flat and uninteresting countryside, quickly passing-by Burgos and León. Our next overnight was spent in a small hotel within the beautiful walled town of Puebla de Sanabria. We parked next to our small hotel in the historic town square, surrounded by important medieval buildings, nose-up to the lovely 16th century town hall steps whilst behind us was the 13th Century church with its tall bell tower, one of the most picturesque places we’ve ever stayed, let alone parked our car. We were given a nice room in the roof with a view of the old town below through the lean-out small windows. It was very warm and our room had no aircon but this wasn’t a problem as we’d just keep the windows open. After a walk around the town and its castle and churches we decided to eat in the geranium-decorated restaurant opposite our hotel, when we again encountered the inconvenient Spanish custom of eating very late in the evening. Most restaurants outside main tourist areas don’t start serving until 20:30 but the owner was happy to serve us beer and glasses of wine until the first-floor restaurant opened. We were joined by many freshly-showered and sandalled Camino Way walkers. This famous pilgrim journey to Santiago de Compostela, the city in north west Spain where the many Camino paths finish at the cathedral of St James, is still undertaken by many thousands each year, over 300,000 people did the trails in 2017. We were staying in a popular overnight town for one of the network of ‘Camino Way’ paths. Our original ‘ferry to Santander’ itinerary included an overnight stop in Santiago de Compostela as we’d have liked to have visited the famous cathedral but our new journey meant we’d need to leave polishing our halos to another time (despite not having walked a 500 mile trail I’m sure they wouldn’t really have minded us getting a quick buff-up). We did agree that much of the routes of many of these pilgrim trails we’d driven next to would not be ones we’d ever choose to walk, being flat and uninteresting for miles and miles, but I guess that’s not the point. Anyhow, back in the restaurant, as we were unable to decide between stewed bulls tail in red wine (presumably oxtail) and snout in tomato sauce (presumably a component of our sausage) we both opted for a simple, beautifully-grilled sole.

Retiring to our room across the square we soon learned through our open windows that the medieval church bell next door struck the hour throughout the night not just once, but weirdly, twice. We guessed it’d been doing this for centuries but, over a bleary breakfast, we failed to appreciate the joke.