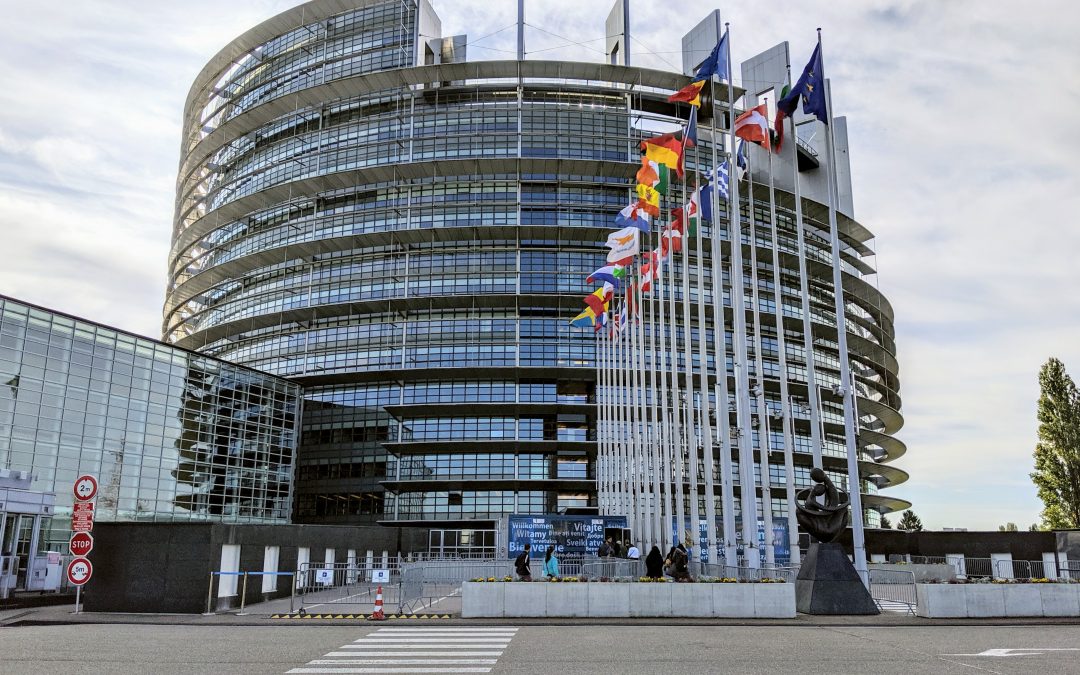 Just a couple hours driving will get us to our overnight stop in Nancy tonight so we’ve plenty of time to visit the European Parliament building just outside Strasbourg before we set off. As it’s Saturday we didn’t expect it to be open but in fact it is so we join a short line of other visitors for an impromptu tour of this iconic democratic facility. Well, we would if we ever clear security but that’s likely to take some time considering how inept some of the people further ahead of us are in the queue. Have these people never been through an airport? A few more minutes of patience and an intervention from the security staff and we’re through, picking-up an electronic visitor guide and a set of earphones and off we go in the footsteps of Nigel Farage & co. Who knows the name of their MEP? Not me, that’s for sure. 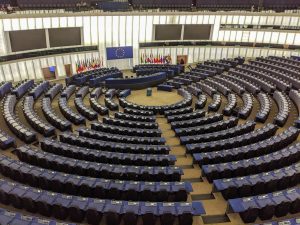 The Parliament building is circular, modern, light and airy, steel and wood, not at all pretentious (unlike the Scottish Parliament building we visited recently), and seemingly functional. Up a flight of escalators, turn right and we’re in the public gallery surrounding the impressive 751 seat main chamber. Underneath the public gallery are the glass-fronted translation booths that provide all 23 official EU languages that are piped to each parliamentary seat in the chamber and to the visitor gallery where translations are also provided through headphones and language selectors. Very impressive. I spot a small Union Jack flag on one of the desks, maybe Mr Farage’s place, I don’t know. Certainly there’re no other desk flags on any other desk so far as I can see. As it’s Saturday Parliament isn’t sitting, of course, so we follow the visitor trail to a 360 degree amphitheatre room that explains how the Parliament works. Here’s a brief intro from Wikipedia:
The European Parliament (EP) is the legislative branch of the European Union and one of its seven institutions. Together with the Council of the European Union, it adopts European legislation, normally on a proposal from the European Commission. The Parliament is composed of 751 members (MEPs) (intended to become 705 starting from the 2019–2024 legislature because of specific provisions adopted about Brexit) who represent the second-largest democratic electorate in the world (after the Parliament of India) and the largest trans-national democratic electorate in the world (375 million eligible voters in 2009).
We could look up our MEPs which, for the South West I found out, comprise three Brexit candidates including the infamous Strictly Come Dancing celebrity, ex-Shadow Home Secretary, Dame of the Order of St Gregory the Great, Latin graduate and Bath-born The Right Honourable Anne Widdecombe, two Liberal Democrats and one MEP from the Green Party.
There were multi-lingual staff on hand to answer any questions the great visiting electorate may have but otherwise the building was quiet, no civil servants or MEPs bustling around as it was the weekend but it was good to see the Parliament building which, I hope, might help to stop any future conflicts between European nations, if nothing else. Overall I was very impressed. Being a part of such a remarkable, relatively young European democratic institution, albeit for maybe only another two weeks or so, made me feel rather proud and satisfied that the UK has lent its support and encouragement to such a great democratic undertaking, and also hugely disappointed and embarrassed that a majority of the 2016 UK referendum voters decided the UK will somehow be better off outside it, I still know not how or why. But I’m trusting in the wisdom of the majority and excitedly looking forward to better-in-some-way-or-other times ahead for the UK, and specifically the £50million a day ‘leave bonus’ promised for the NHS.
…and that was about it, really. We selected a non-motorway Google route to Nancy and off we went….
.
.
For some early photos of the European Parliament building click here