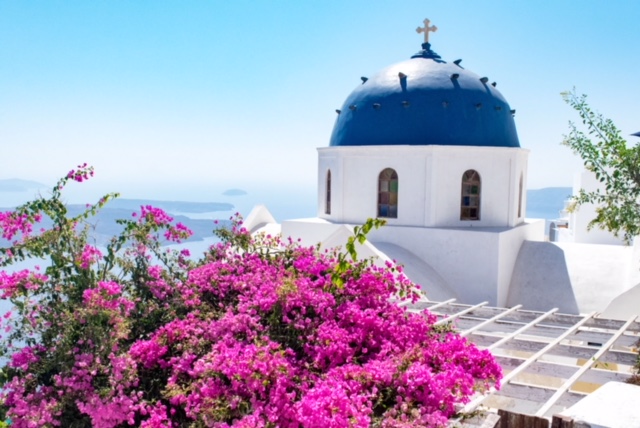 Santorini is a crescent-shaped island enclosing a 12x7km lagoon in the centre of which is its creator, a small volcano island which together indicates their history. Wikipedia says: [Santorini] is the site of one of the largest volcanic eruptions in recorded history: the Minoan eruption occurred some 3,600 years ago at the height of the Minoan civilization. The eruption left a large caldera surrounded by volcanic ash deposits hundreds of metres deep. This may have led indirectly to the collapse of the Minoan civilization on the island of Crete, 110 km to the south, through a gigantic tsunami. Another popular theory holds that the eruption is the source of the legend of Atlantis. Whatever actually happened one can see from the crater that it probably made quite a bang at the time. The internal west-facing crescent rim is 300m of cliff-face whilst the longer eastern shore is softer-shelving with many black sand and pebble-ash beaches. The depth of the caldera, at 400m, makes it impossible for any but the largest ships to anchor anywhere in the protected bay but two cruise liners were moored there yesterday.

It’s hot, well over 30 degrees in the shade, so it will have been warmer than this higher up and in the full sun where we went yesterday, our first full day on the island. We caught a bus to Fira, the island’s capital, that clings to the top of the cliff on the west coast, looking down on the lagoon. We then changed to another bus for a 10-minute ride uphill to Imerovigli, a small town where the iconic blue-painted church dome used to depict the island in all tour guides featuring Santorini is to be found and I soon added my own version, including a beautiful nearby bougainvillea in full bloom, to my photo collection. There are hundreds of similar blue-domed churches on Santorini (pronounced “Sandorini”, btw) but few that overlook the volcano lagoon in which the many visiting cruise ships moor and help provide the island with its main economy. The view from the church and the path all the way back downhill to Fira is breathtaking. 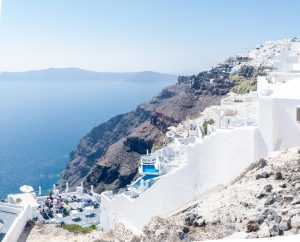 We walked back along the clifftop path to Fira, replenishing our water supplies along the way. A shared salad and a carafe of local white wine in the main square brought our lovely walk to a very pleasant end. Then a short walk to the bus terminus to catch our bus home but we were shooed off just before we were due to leave because of a ‘bus problem’ then re-boarded onto another bus 10 minutes later, this one with a very crotchety conductor so all us tourists kept our heads down in case we were shouted at for some reason like he was doing to the locals. No matter because we were all unceremoniously ejected from the bus as soon as we arrived in the town, presumably so he could load the large queue of people waiting to return to Fira, meaning we had a 20 minute pretty walk home along the seafront so not really so much to complain about. 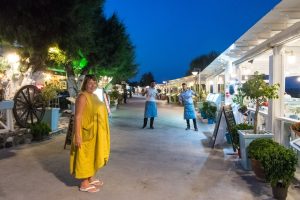 We’re staying in Kamari, a small resort lined with sun beds and palm sun umbrellas but the beachfront is also a very elegant walk lined with dozens of bars and restaurants, all romantically lit, each with an earnest staff member outside encouraging you inside to eat at their restaurant and each playing house, dance or club classic music so we feel right at home. Breakfast in the hotel is ok, the coffee’s nice, at least. We generally skip lunch and look forward to sharing dinner at one of the beachfront tourist restaurants. We’ve stuck to fish (which has generally been over-cooked) and unremarkable house wine so far which has proved an ok if not exciting dining strategy but TripAdvisor can advise no better. If in doubt I find it’s best to stick to local food and a typical Greek salad has proven a good infiller, fresh tomatoes, cucumber, peppers, olives, onion, feta cheese and a few capers all drizzled with olive oil, super healthy and just up my street, even better when served with a better than average glass or two of local white wine…