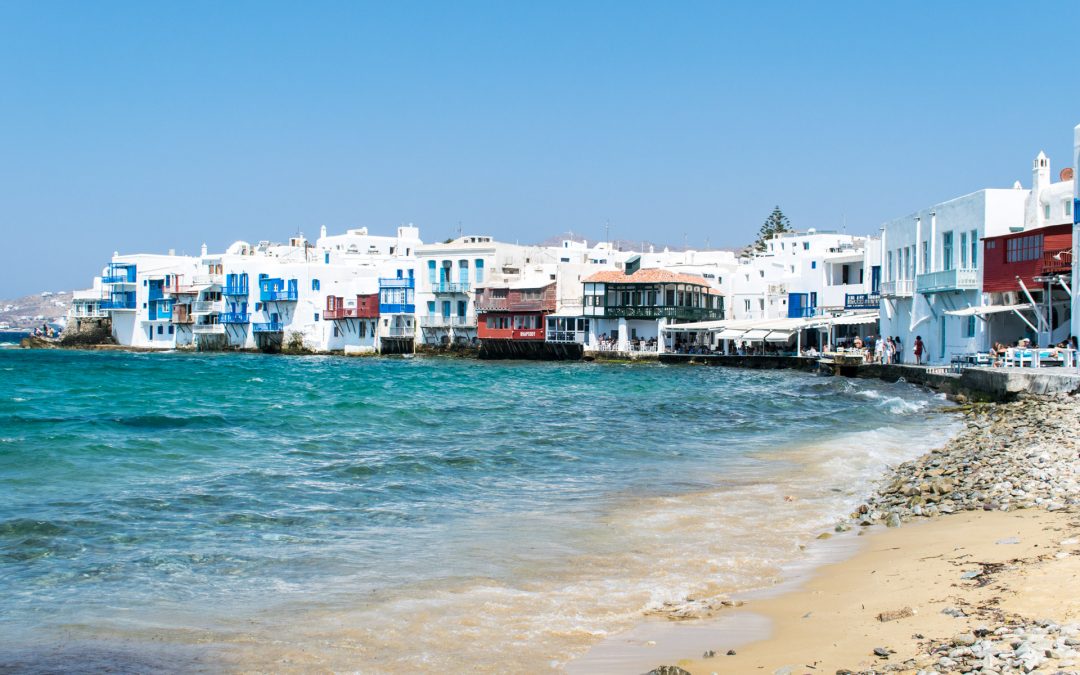 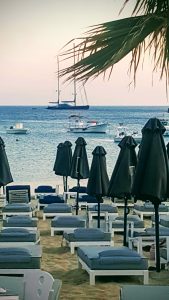 We’re back on Mykonos, a little further down the coast from where we stayed before going on to Santorini last week, in a hotel that thinks rather more of itself than we or others seem to. Ah well. We walked down the hill to the expected pretty little bay last night to find a bar overlooking the sea but we found more than we bargained for, acres of sun beds on the beach packed so closely together you’d have to apologise to the occupants of every bed around you if you so much as shifted a buttock on your own sunbed. Half your bod would be covered by everyone else’s nearby sun umbrellas so what would be the point? And in any case, the season is coming to an end so there just aren’t that many people here to use the huge number of (chargeable) sunbeds laid out on the beach so I just don’t get it.

We chose a nice-enough trattoria overlooking the sunbeds and thence the sea (we actually fancied the one advertising it had a wood-fired pizza oven!) then, whilst we shared a tzatziki starter the sun quickly set and we had the few remaining minutes of the day before it gets dark, when all the beach and boat lights come on and the twilight changes to that lovely tropical dusk. Gliding into the bay came a very beautiful, very high twin-masted luxury sailing boat, painted a very modern grey, only its navigation lights alight. In the fading twilight it actually looked quite menacing. A long, matching-grey tender boat was launched, presumably to take the owners to dinner somewhere nearby but certainly not at our trattoria. We thought it looked like the sort of yacht someone like Blofeld, the baddie in many of the James Bond films, would have so for the rest of the evening we called it Blofeld’s Boat. There were a number of other beautiful yachts moored in the bay too but Blofeld’s was the smartest by far.

We explored Mykonos town when we were here last week so we don’t feel like doing the same again this time. Our last hotel was on the hillside overlooking the Old Port, from where we caught the water bus to the town quayside, a pleasant 20-minute ride away. Offshore were moored three huge cruise liners and another was tied up at the nearby cruise quay, each carrying many hundreds of cruisers, so we knew the town was going to be busy at least until dinner time. Two of the ships were from the Costa line. No, not the coffee chain but we guessed they may be sister ships of the Concordia, the Italian cruise ship that ran aground off the coast of Tuscany in 2012 with the loss of 32 lives. Captain Schettino apparently abandoned the ship himself whilst half of his passengers and crew were still to be rescued. I looked up the disaster and learned Schettino was ordered back onto his ship in no uncertain terms by a captain of the Coast Guard to take control of the evacuation but he never did. Schettino was later convicted of manslaughter and is now serving a 16 year jail sentence in Rome. The salvage and compensation cost to Carnival Cruises, the owners of the Costa cruise line, was estimated to be 2 billion US dollars. Yep, two thousand million US dollars and 33 lives lost. (One of the salvage crew died during the salvage operation.) 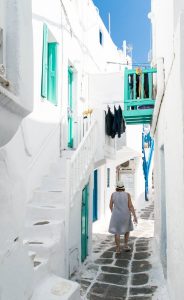 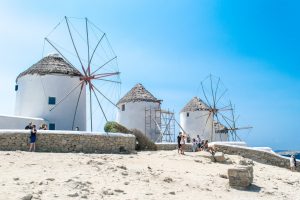 Anyhow, that was not our story but I found it interesting. We spent our day in Mykonos looking around the lovely Mykonos Town (or Mykonos Chora, when town and island have the same name). Mykonos Town is a stunningly picturesque Cycladic town with a maze of tiny streets and whitewashed steps lanes, houses and churches, little shops, boutiques, art galleries, cafes, stylish bars and restaurants gathered around its harbour in the middle of a wide bay. There are steps everywhere but by keeping the sun in the same place we found it quite easy to maintain direction and navigate the twisty lanes with our free tourist map. At one end of the town is a pretty part called Little Venice, for some reason, because it bore no resemblance to any part of Venice we’ve seen, little or otherwise, but it’s where many tourists gather to watch the sunset. Still, it was/is very picturesque and we actually liked everything about the town. We didn’t find it too crowded with fellow tourists, cruisers or otherwise, we managed to get a nice table at one of the harbourside restaurants quite easily when we wanted a drink and a bite to eat later and we didn’t think we were overcharged too badly either. So yes, a stylish and pretty Aegean tourist destination and also one of the big party centres of the Aegean, we learned, but for some reason neither of us were invited, can’t think why.

The first time I visited the Greek Islands was to Corfu with a very lovely (and very shapely) 27 year old girlfriend who I’d recently become friendly with over a new payroll project at Gulf Oil and who quickly thereafter agreed to become my wife. I think it’s just about appropriate to point out here, without my grown-up daughters crying, “Eww, Da-ad”, that in those days it was de rigueur for the girls as well as the boys to go about the hotel poolside and beaches on many of these islands topless, something I don’t believe is appropriate for today’s pretty young things (or even not so pretty young things) on the Greek Islands we’ve been to these past few days. Just saying.