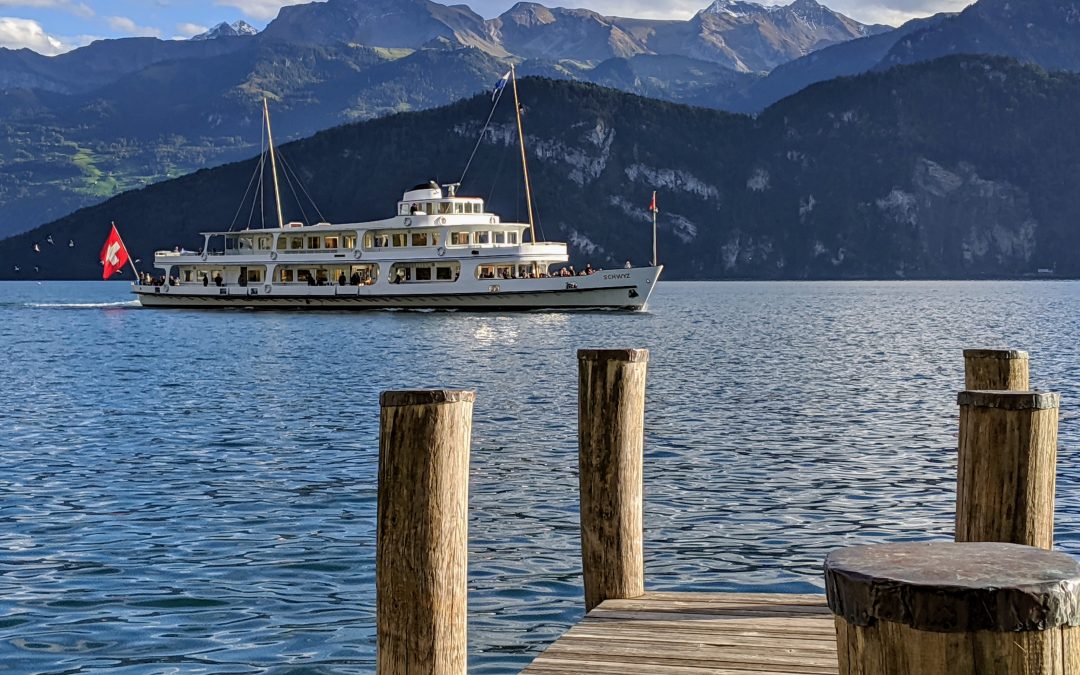 We were lucky to cross the Alps from Como yesterday in warm clear sunshine because today it has rained all day and the cloud is down to lake level. Instead of the 11-mile two-lane Gotthard tunnel we decided to take the more spectacular up-and-over-the-Pass route and although it was a very lovely and almost deserted road it was not as breathtaking a trip as we had expected. Maybe we are hard to impress but we did agree it was much more pleasant to drive over the mountains at this time of year than through them. A couple more hours gentle driving on perfect, picturesque Swiss roads brought us to Lake Lucerne and our small waterfront hotel in the town of Weggis, on the opposite bank from its namesake city. A glass or two of local (Swiss??) wine and a cup of tea on the waterside terrace watching the upending swans and the passing boats in the sunshine whilst checking the news and our email was just right. When the sun set it immediately got cooler and we decamped indoors for two local dinner dishes in the hotel’s restaurant, goat cheese pie (actually more like fritters) and pan-fried Swiss rösti, unusually covered in various small mushrooms and served with pieces of various stir-fried vegetables, nice enough but the jury stayed out on both dishes. I tried some local ice cream for dessert which was full-flavoured and delicious, quite different from Italian gelato.
The weather forecast promised heavy rain by morning and we weren’t disappointed when we woke. Still pouring down after breakfast we decided to take the ferry across the lake and spend a few hours looking around Lucerne in the rain. With usual Swiss precision the boat arrived and departed exactly to time and less than forty minutes later we disembarked next to the famous Chapel wooden roofed bridge which, considering it’s been there since 1333 has burnt down and been rebuilt since I remember last walking over it, in my teens, having just purchased a set of Swiss cowbell door chimes we last used on Harptree House. 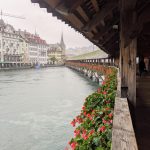 By now we were appreciating that the cost of living here is very high. The Economist regularly publishes a light-hearted cost of living index based on the worldwide prices of a Big Mac but, failing to come across a McDonalds restaurant in Lucerne Old Town, I decided Starbucks would do instead and the (large) coffee and (small) hot chocolate we enjoyed whilst catching-up with the Wales v Fiji rugby World Cup commentary came to an eye-watering equivalent of £12.14p. Our hotel had been kind enough to give us umbrellas for our trip out and we certainly needed them so after a good damp walk around the very pretty and uber-smart Old Town area of the city we strolled back in the rain to our ferry station, easy to find because it was next to the harbour Ferris wheel. The return 35-minute ferry ride cost just over £64 for us both which, even in these Brexit-challenging times for the Pound, seemed a little steep to us Brits. 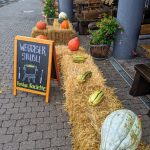 True to the Swiss forecast the rain stopped exactly to time, the cloud lifted and the sun has just peeped out for the final hour before it sets behind the impressive ring of mountains surrounding us, none of whose names I recognise, unfortunately. It’s obviously pumpkin season because many of the restaurants around the nearby square are displaying these pretty and colourful vegetables outside their frontages, presumably advertising their Autumn menus.
Tomorrow we continue our journey towards Calais with a couple of nights in Strasbourg, an EU capital city neither of us have visited before so we’re looking forward to that.
For some early photos of Lucerne click here.