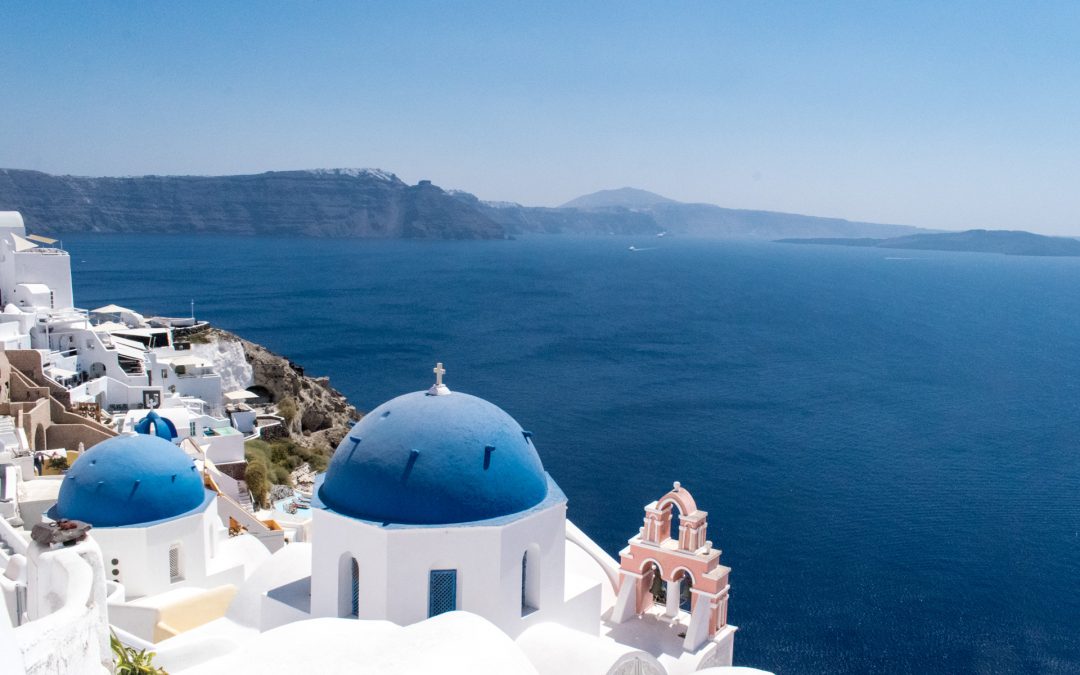 We received an email yesterday morning advising us that, because of a strike, our ferry back to Mykonos today is cancelled, sorry and all that. The ferry company offered some comfort that there was a possibility we could be accommodated on a later scheduled ferry but to do so we would need to take our tickets to their office on Naxos, another island an hour’s ferry ride away, and we are on Santorini, the island the same company delivered us to on Friday. So quite funny in a way but also potentially quite serious as this is high season and we need to get to Mykonos to fly home. The joy of travelling.
Cut a long story short we are now on said later ferry and, contrary to all advice, the ship arrived exactly on time and there are dozens of empty seats around us despite well over a thousand people boarding up the car ramps with us, all pulling heavy cases, children in buggys and more. With a coffee and a cookie just purchased from the lounge cafe we’re comfortably seated and on our way back to Mykonos on a very powerful fast car/passenger ferry.
Santorini was a delight. Essentially the island is a volcano rim and its central lagoon is around 400 metres deep so there’s a couple of pretty impressive reasons to visit already. There’s nothing particularly pretty about the island itself, we thought, but the rim and cliff are spectacular with a number of white-painted towns perched on the lip and hanging-on to the cliff face. We saw little growing in what we thought would be fertile volcanic soil save a number of bedraggled vineyards beaten by the hot sun but they must grow lots of fruit and veg too because it’s plentiful, fresh and delicious. We rented a tiny and fun Smart car to explore the rest of the island yesterday and really enjoyed exploring, particularly to Oia, the northernmost town, again built precariously and picturesquely on the northern rim and its cliff-face overlooking the lagoon. Like Santorini’s other towns Oia is almost blindingly white, with predominantly royal blue highlights. If you’re minded to be outrageous you might go for magnolia but you certainly don’t need a Dulux colour card here, a few pots of white and one of blue is all that’s required, the colours of the Greek flag.
Most of the houses, hotels, shops, bars and restaurants are very small with thick walls and flat roofs, all painted brilliant white against the powerful sun. (Don’t they know this makes photographing it all very difficult?) Brilliant red bougainvillea provide dramatic splashes of colour and the tourist goods available everywhere are also vibrantly coloured but again predominantly blue. All the people we’ve met have been just as friendly and welcoming as the people we meet everywhere else we go in the world, you just have to recognise that everyone is out to make a buck but not necessarily to fleece you. We’ve found that a pleasant main course dinner for two, with wine and coffee, comes to a not unreasonable €40-€50, not at all bad considering the £ is now equivalent to the Euro here, God bless our Brexit friends. Talking of food, which we tend to do a lot, our favourite find has been souvlaki, most often skewered chicken breast pieces but can also be lamb or seafood, cooked gently over a grill and served with tzatziki, a lovely dip of Greek yoghurt, cucumber and garlic, pitta bread, a small salad and maybe a few chips or a spoonful of wild rice. The owner of what became our favourite restaurant (ok, we went there twice) told us she makes seventy portions for dinner every day, it’s their most popular dish, and I’m not surprised. I’m keen to try to make it at home but I’m pretty sure it’s not going to taste the same in Bristol.
We’ve been asked whether Santorini is unmissable. Well, I’d say it’s unique because I’ve never stayed on a volcano rim before despite this one being a reasonably safe 3600 years old. The crater is spectacular at 12km by 7km and the towns built on its lip are very pretty indeed. It’s somewhere to visit for a few days as I personally wouldn’t come here to lie on a sunbed all day, there are nearer and easier places to do that. The food is nice, the people are lovely and the (house) wine is generally ok. As you’d expect of a volcano it’s hilly and there’s a lot of walking to see the main sights. I wouldn’t come in the high season, or even the end of the high season like we’ve done because there are bucketloads of tourists but despite that it’s buzzy, everything is open and the shops and restaurants are very keen for our business, presumably because of the parlous state of the Greek economy (VAT is 24%). There are any number of blue-domed picturesque churches, a huge blue sky, dramatic volcano scenery, hot sun and enough to see for a few days visit. For us, we’re very glad we’ve come but having explored it and taken far too many photographs as usual it’s unlikely we’ll come back because there are just so many other places we want to see too. So yes, I’d put Santorini on the ‘unmissable’ list but now we’ve moved it to the ‘done that, got the t-shirt’ pile.
So we’ve just called at Naxos where the ferry disgorged hundreds of fellow tourists down the ramps and onboarded many hundreds more and now every seat is indeed full. Next stop, Mykonos, and I’m sorry for the hundreds of souls we’ve likely left back on Santorini because they didn’t know or couldn’t get on the later ferries. Ho hum.