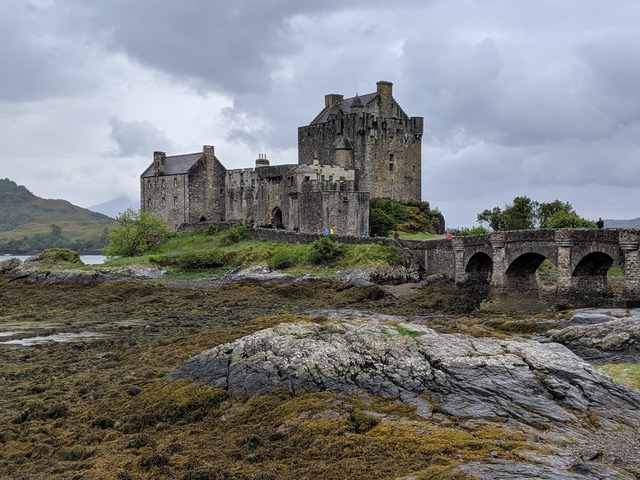 “God’s own country”? An understatement, I say, and haggis for breakfast too!

We’ve reached “the end of the road” according to the sign at John o’Groats on our driving tour of Scotland, with the dogs. It’s been a wonderful trip so far. The weather has been very kind to us, it was 25 degrees last week, so our view of the best of this country has been perfect. And what fantastic, grand, beautiful, jaw-dropping scenery it is, with a new gobsmacking view, sparkling river, picture-perfect harbour or grand loch vista seemingly around every corner. It’s over 30 years since we were touring here last, dragging a trailer, staying in a tent, in the rain, every day, with a very-nearly-toddling one year old, when we were both the age our youngest daughter is now. That was a memorable experience up the west coast too but this is the proper way to see it, sunny, warm, clear fresh air with no crowds, only a few midgies, comfortable hotels, a lovely car and hundreds of miles of fast, fun, exhilarating road through some of the best countryside mainland Scotland has to offer.

Our original idea was to drive the North Coast 500 mile circuit of the West Coast and the Highlands, the ‘NC500’ as it is dubbed by the Scottish Tourist Board, starting from Inverness, up and over the top, down the west coast then back to Inverness. But a) we’ve got the dogs, and b) we didn’t want to do the full 500 mile circuit. We’re limited to dog-friendly hotels, of course, and we thought the north west corner of the country was likely to be rather bleak and featureless. Maybe we were wrong but even the trip to John o’Groats and Thurso didn’t really appeal but we included it because we’d never been ‘to the top’ before. Now that we’re here I’m very glad we came. The long drive up the Highlands east coast can’t beat the scenery on the west coast but the roads are still fun and there are many other things to stop and see instead, castles, lochs, distilleries and many small towns & villages. Many of the beaches here on the north coast are world-beating and very beautiful indeed. Not lie-on-a-lounger-and-sizzle-with-a-beer beautiful but simply beautiful in and of themselves.

We put a mildly-aggressive mileage schedule together based on tours contained in two old AA Touring Guide to Britain books I bought from M&S nearly forty years’ ago, shortly after I first started working on Oxford Street. Doing it this way, we thought, we’re not limiting ourselves to a single ‘See Scotland’ route determined by marketing people but instead we’ll fit in as many of the best sightseeing routes as we can into the time we’ve got and it’s worked out very well, so far. The popularity of the NC500 meant we had to book our dog-friendly hotels a number of weeks in advance to be sure of staying where we wanted and not be forced to drive hundreds more miles to get to farther-flung hotels. The ‘boys’ have both been perfect travel companions, snoozing in the car whilst we drive many hours each day, jumping out for a walk around somewhere new then bedding down without any fuss at each of our overnight hotels.

We started our trip just over a week ago with a 6+ hour Sunday drive to our first pub stop at Arrochar, near Loch Lomond. From there we’ve followed the guide book tours returning to, or moving on to, our next overnight pub or hotel. I understand why we’ve not returned to this part of the world for so long but I’m really glad we’ve finally come back and seen what I believe is some of the most beautiful and remarkable countryside in the world, and we’ve been lucky enough to see a lot of the world’s beautiful places in our travels over the years so we think we’re reasonably qualified to judge. As a driving holiday our route is also one of the very best in the world, and again, we’ve been lucky to have done a number of other great world-class drives too. The people we’ve met have been friendly and lovely and we’ve managed to understand most of them. The car’s been fabulous, the weather’s been great and the food’s generally been good. Great breakfasts, particularly, including smoked haddock and haggis at most places, black pudding at all, but the cooking has also been scarily poor at a few places. That’s normal anywhere, I guess, and what sometimes makes eating out an adventure. We’ve enjoyed some very nice local real ales, from a proper barrel rather than a frozen steel keg, although I have had to ask for the sparkler to be removed rather too many times, presumably a hang-back from the fizzy Tartan Bitter days of our last visit. Our rooms have all been comfortable, the boys have been good and the main event, the scenery, is just to die for. And it’s all just there, waiting for you to drive to see it, and we have regarded it with the proper awe and respect it reserves. The only downside, I must be honest, has been some very questionable coffee at a number of places along the route and nowadays there’s surely no excuse for that on the British mainland. Ah well, not even God’s own country is perfect then.

See all our pictures on ‘Latest Photos’ or here.
More detail about our plan and trip below. We wouldn’t change a thing if we were do do it again. I have linked a number of the websites we used in the text below.
All hotels were booked through Expedia using the ‘Pets allowed’ filter under Amenities but we also called each hotel to confirm.
Village Inn, Arrochar. 2 nights. Prettily located on the bank of Loch Long. Our rating: 3*. Their cooking was not to our liking.
Touring Guide 1, tour 98 ‘Beside Loch Lomond’ 71 miles. We added a very lovely 90 minute boat trip on Loch Lomond from Luss from which we saw ospreys nesting, albeit from a distance, then drove the route in ‘reverse’.
Lovely seafood dinner at Loch Lomond Arms Hotel at Luss.
Visit Scotland: Drive Argyle & Bute to Oban. 84 miles.
We called-in at Loch Fyne smokery and bought wonderful thickly-cut smoked salmon rolls for a later picturesque lunch.
Wide Mouth Frog hotel, Oban. 2 nights. Our rating:  4*
Ferries to Mull were fully booked so we brought-forward our plan & drove Oban – Glencoe circular, Touring Guide 2 tour 76 Glencoe & Brender Pass. 97 miles.
The A82 near Bridge of Orchy is the location where James Bond was filmed driving to Skyfall. We deliberately didn’t take ‘the road to nowhere’, a single track road to Loch Etive, but we did add the very beautiful B863 road around Loch Levin from Glencoe.
Back to Oban via Castle Stalker viewpoint.
We ate beautiful seafood at Ee-usk both nights, a busy, first-class seafood restaurant on the harbour. There were queues to get a walk-in table both nights but we had booked beforehand.
We drove to Fort William then on to Glenfinnan to watch The Jacobite steam train (aka ‘Hogwart’s Express’) cross the Glenfinnan Viaduct. We took the very beautiful A861 road on the south side of Loch Eil to Ardgour.
The Inn at Ardgour. Our rating: 4*. No charge for dogs
We took the ferry back over the loch to Fort William and did the very nice walk to Steall Falls, then visited the Commando Memorial at Spean Bridge.
Kinkell House Hotel, Dingwall. Our rating: 5*
Excellent pub dinner at nearby Allangrange Arms at Munlochy with Jo & James, friends from Bristol who were also visiting the area!
Our longest driving day, 195 miles. We visited the pretty village of Plockton then went over the ’new’ and awful-looking Skye Bridge and back then visited beautiful chocolate-box Eilean Donan Castle on the Kyle of Lochalsh.
Touring Guide 2 Tour 82 ‘The Applecross Peninsula’ and Tour 83 ‘In Wester Ross’. The spectacular Strathcarron to Applecross road or ‘Bealach Na Bà’ is considered by National Geographic magazine to be one of the best roads in the world, and whilst it is spectacular, it must be almost impossible to do this road in high season.
Gairloch Hotel, Gairloch. Nice room overlooking the loch. Our rating: 4*. £10 charge for the dogs.
We visited the beautiful NTS garden at Inverewe then drove all the way to Tain, above Inverness.
Royal Hotel, Tain. Grand bridal suite looking down the main High Street. Our rating 4*.
We stopped-off to visit the local Glenmorangie distillery but the morning tours were fully booked so we visited the nearby spectacular Dunrobin Castle instead before continuing to Wick, John o’Groats and Thurso.
Melvich Hotel, nowhere near Thurso, its postal address, but near beautiful, deserted Melvich Bay. Wonderful authentic Italian pizzas in their restaurant. Our rating: 5*
We took the single-track with passing places A897, another great driving road, back down to the A9 near Helmsdale. We visited Pitlochry and had ‘tea and a piece’ in wonderful Hettie’s Tearoom on the main road.
Royal Dunkeld Hotel, Dunkeld. £20 charge for the dogs. Our rating: 4*
Visited the lovely Dunkeld Cathedral then the long drive to Keswick down the ‘average speed cameras’ A9, through the wonderful Cairngorms scenery to Keswick.
Lodge in the Vale, Nr Keswick. £20 charge for dogs. Continental breakfast. Our rating: 3*
We actually left the local Kings Head pub that we had booked for dinner because of their disappointingly uninspiring menu and instead drove to the nearby Horse & Farrier pub at Threlkeld which we’ve been to before and which again proved excellent.
All the hotels we stayed at were relatively expensive, even booked through Expedia. Most were over £100 per night and some charged £10 or even £10 each for the dogs too.
Total miles 2101, home to home, 45.1 mpg.
References:
The touring guides:
AA/M&S Touring Guide to Britain 1978
AA/M&S Second Touring Guide to Britain 1981
Both excellent hardback guides are currently available (used) on EBay for just a few £££s.
The Guardian: Speeding, congestion and protest: the dark side of Scotland’s North Coast 500 route.
https://www.theguardian.com/travel/2019/may/25/dark-side-scotland-north-coast-500-route-speeding-congestion-protest
The Ultimate List Of Things To Do On The West Coast Of Scotland
https://www.bonawehouse.co.uk/blog/ultimate-list-things-west-coast-scotland/
Drive Argylle & Bute to Oban
https://www.visitscotland.com/see-do/tours/driving-road-trips/routes/planner/argyll-coastal-route